These exceptional pieces, thought to be Roman and dating from the 2nd Century AD, are now on display in Ipswich Museum. The Antiquaries Journal for 1925 contained an article by Miss Nina Layard concerning Cavenham. She reported the discovery of what is now called "The Cavenham Crowns" on Cavenham Heath.

Their location is not specific, described as being "on a slight elevation overlooking the marshes on the right bank of the River Lark. It lies midway between the Icknield Way, and the so-called Black Ditches. There are two bronze crowns and an ornament of chains and discs that would have been used as a headdress. The three items are thought to be have been used in some form of pagan ritual, probably being worn by priests officiating in some sort of temple.

The crowns would originally have been adorned by silver decorative plaques. The larger of the two is fitted with metal loops which would have supported some additional ornamentation, thought to be bronze feathers, an example of such having been excavated nearby. It also features a lace-like design along its edge. Interestingly, both crowns are adjustable, to accommodate differing head sizes. 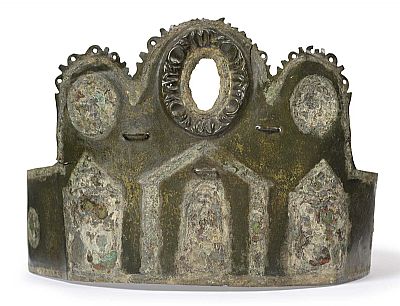 The bronze chain headdress consists of five bronze disc joined together by eight metal chains, formed of S-shaped links, designed to fit the head, possibly being worn over a leather cap. The slightly larger, central disc would have been worn on top of the head, with the other four being positioned on the forehead, at the back of the head and one over each ear. 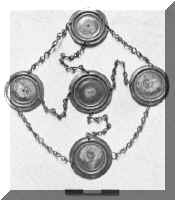 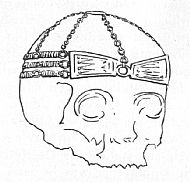 Specimen tiles and fragments of pottery also taken from the site were identified by Mr Wright of Colchester Museum and dated from the 1st to 3rd or 4th century A.D. While a later dig identified a very large urn whose mouth measured 131/2 inches and dated 40 to 80 A.D. and ‘brown -leather’ ware was dated 1 to 50 A.D. Though no villa was found within a 30-yard radius it is considered likely that Roman dwellings did exist.

The source of this report; Miss Nina Laylard obtained the items in 1918 from the landlord of The Crown Inn at Mumford and in the face of much doubt set out to discover their origins. With Reginald Smith, Miss Layland tracked down the original findspot, and excavations further demonstrated a Roman archaeological context, by 1924 academic opinion agreed with her conclusions. 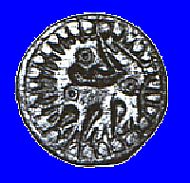 Illustration; Reported to be found in Cavenham this ‘animal’ brooch measuring 1.2” diameter and 0.6” thick is now held in the Clouston Collection (No786)