Misdeeds and Misdemeanors at the School

The School House was built by the Cavenham Estate in 1871, owners at that time was Henry Spencer Waddington. The original construction was of a single classroom with a two-story cottage attached for the resident teacher. The buildings were of flint with a slate roof and brick ‘dressing’ at all corners and around the windows and doors. It stood on half an acre of ground adjacent to the vicarage (since demolished). A second classroom was added in 1903 to accommodate infants under 5 as numbers had risen and children could not be successfully taught in a single group any longer. The extension allowed for 70 children, records show 35 attended.

The school was let and managed by the Foundation Managers of Cavenham Public Elementary School and the Education Authority. Their Managers’ Notebook records the members of the committee, usually the incumbent vicar, landlord and 2 to 4 other residents of the village. The managers set holidays, dealt with arrangements for cleaning, maintenance and heating and engaged the teachers over the years. The education authorities made periodic inspections as did the diocesan inspectors.

Most of the notes deal with the very routine concerns of the practical running of the school but some items do offer some insight into village life at that time. Items of interest include raising the salary of the incumbent teacher from £20 to £30 in July 1904, four months later she resigned citing continual low pay and the loss of her garden and orchard which had helped to eke out her salary previously. She also lamented the lack of desks and equipment in general. Her resignation was accepted and with the new teacher came new desks, and plans to clean and paint all the buildings.

In March of 1906 attention was drawn to the need for scrupulous disinfecting and the generous use of limewash as there was diphtheria.

In June of 1908, a special meeting was convened to deal with a parent’s complaint regarding his son’s canning for failure to do sums which had been set. The managers requested that other forms of punishment be used in the future and that all punishments be recorded in the punishment book. (not found).

The Manager’s Notebook records the dismissal of the Head Mistress in 1923 at a “reduced rate of pension” with a reference about the discipline of a child of one of the managers (non-specific). The balance of authority in this small village is again reflected in another incident at the school, after several thefts the teacher marked some money in her bag, on catching the culprits ‘red-handed’ she felt certain of her cause but to no avail as the parents stepped into the fray on the side of the children.

In 1928 enrolment dropped to 16. Four of these were from Lark Hall Farm located towards Higham. Accordingly, plans were completed and the Lark Hall children assigned to Higham school while the Cavenham children went to Tuddenham school. Letters were sent out to notify parents officially and the school was closed on March 31st 1929. The building was occupied by estate workers until it went into private ownership in the 1950s. 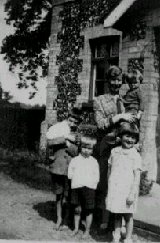 The Firman family moved into the School House in 1928. Alan Firman then a young lad lived with his parents, two brothers and two sisters. His father was the estate bricklayer but supplemented his income by mending shoes, soldering kettles and mending furniture. As a boy, Alan recalls earning half a crown for taking a gallon of milk up to the house twice a day and lighting the copper fire to sterilize the milk buckets. The estate owned two Jersey cows, especially for The Hall’s milk supply. Alan earned another 6 pence, a mug of cocoa and a thick slice of bread and jam for gardening Nellie Sangsters garden on Saturday mornings. Nellie, who lived in a thatched cottage next to the post office (since demolished) was, by all accounts, a woman of character she would frighten all the children by standing on the pavement and shouting at them. They daren’t walk that way when she was out. She was also remembered for tying her cat to the door handle of her cottage. Nellie would paint her ceilings with whiting which came from the shop in a ball that had to be soaked in water overnight. Lumps of whiting hung from the ceiling where it had not dissolved satisfactorily.