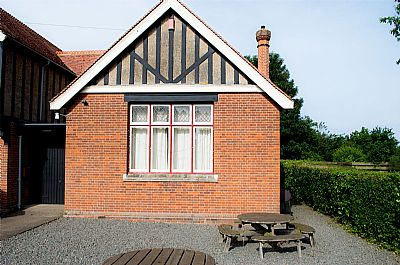 The club is licensed, and opening times are listed on all of the notice boards in Cavenham.  It is a members club which is open to all to join, but casual visits can be made, as guests of the members.

History of the Club
The village hall, built-in 1902 and known as the ‘Reading Rooms’, has been the centre of village life in Cavenham for almost a Century. Used as a venue for children’s parties, dances and wedding receptions etc.

A suspended stage at one end of the hall was used for both adult and children’s pantomimes. Such shows included ‘Aladdin’, ‘Snow White’, ‘Babes in the Wood’ and ‘Cinderella’, this last one running weekly in surrounding villages from January 1953 until the Coronation of Queen Elizabeth II in June of that year.  All these pantomimes were written and produced by Reuben Gooch, one of the founders and honorary secretary of the club.

Other recreational activities included cricket and football. Cavenham had teams in both. The original playing fields were situated in the meadow behind the post office. A fine double fronted wooden pavilion was used for scoring and changing. In the latter half of the 1940s, the pitch and pavilion were moved to a new site within the park, near to the Park Gate Lodge. The unused drive to the demolished Cavenham Hall ran right through the pitch.

Cricket was popular every Saturday and especially Sundays, when many villagers would come to watch the matches against other local teams. Games were played throughout the later 1940s to late 1950s.

As an Estate Village, the working people of Cavenham were almost all employed on the Estate.

The community was a close-knit one and monumental events were marked with great village celebrations, such as V.E. Day, Coronations and Jubilees. The street procession in the photograph marks Cavenham's celebration of the Silver Jubilee of King George V and Queen Mary in 1935.

In 1948, the Gough family, owners of the Cavenham and Lackford Estate established the Cavenham Club as a licensed member's social club for Cavenham, Lackford and surrounding villages.

This objects remain to this day the maintenance of a club for the use of members and guests for recreation, social interaction and refreshment. Although the core membership was originally of estate employees, this is no longer the case and members come to use the club from all around the area.